If you are vegan, pizza obsessed or read small scale news frequently, you may have heard that a while ago Pizza Hut were going to be trialling vegan cheese in 5 of their restaurants nationwide. Obviously the Vegan Gods were on my side that day, as one of the restaurant’s happened to be Crawley, 15 minutes away from me! As a vegan, pizza lover and owner of this blog, I knew I must shoulder the responsibility and go try the cheese… For the sake of the people.

As any experienced quester knows, one cannot undertake a quest of this magnitude alone; first I had to enlist an ally. Enter Emma, a fellow vegan and pizza lover. We chose our date and ventured forward. We got to Pizza Hut around 3pm, which was ideal as it was super quiet (as in, there were about 6 customers). After being seated and ordering drinks (refillable soda with all the mix n match flavours OBVIOUSLY) we had a good old look at the menu. As we both ended up wanting the same thing, we opted for a larger, sharing size pizza for two which worked out cheaper than us both getting our own. As any self respecting vegans would do, we ordered the Veggie Pizza which comes with spinach, mixed peppers, mushrooms, sweetcorn and red onions (but we switched peppers for extra sweetcorn) and obviously asked for it with vegan cheese. This was accepted no problems at all (I was worried that the staff might question it or make it difficult to order but it was super simple). Something to note at this point is that Pizza Hut do not (yet?) have any special vegan toppings such as mock meats, so topping choices are limited to vegetables!

We then helped ourselves to the salad bar which is super vegan friendly! Pizza Hut have posted online here everything that is SFV in the restaurant which includes loads from the salad bar- bacon bits anyone?! Our pizza then arrived so I’ve decided to grace you with some pictures of this beauty (I’m not a food blogger or photographer ok give me some credit for trying). 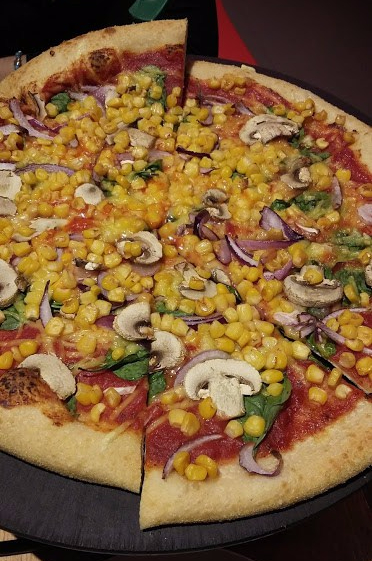 AmAZIng right??! The pizza was SO good. It’s been so long since I had ‘normal’ pizza that this was a bit of an emotional moment for me. The dough was perfectly crisp yet chewy, there was a generous amount of all the toppings which balanced out the cheese perfectly. In large quantities Violife can have a weird texture (kind of sticks to your teeth) but the amount on our pizza was perfect, enough that it was stringy and cheesy and yum without being overpowering. I’d defo give this a 9/10. Unfortunately it’s just the cheese that got a vegan makeover at Pizza Hut (I would pay good money for vegan version of their new s’mores cookie dough dessert..) but we were able to go elsewhere for a massive slice of vegan chocolate cake afterwards!

So have I got you interested? Well luckily for you, Pizza Hut announced today that from November 29th 2017 they will be offering vegan cheese in ALL of their restaurants nationwide. Yes. That’s right. Vegan pizza everywhere. (For a small £1 additional cost). This is a momentous day for us vegans. I recommend celebrating with pizza.

(This post was not sponsored by Pizza Hut. I wish it was.)